We celebrate Woman in Groundwater Science

We celebrate Woman in Groundwater Science As South Africa readies itself for longer and warmer days associated with the Spring, water access needs are highlighted with water uses spanning drinking, other essential and increased recreational uses.

This Spring, Nthabiseng Nooe from the Young Professionals Committee of the Ground Water Division speaks to Awodwa Magingi about her work as a hydrogeologist who contributes to managing and planning South Africa's precious water resources. 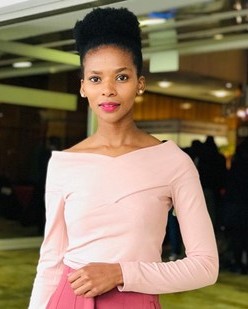 Awodwa, think back to your earliest memories, what was your first inkling that you wanted to be a scientist?

I grew up in a village with little access to information on the width of career possibilities, and the common careers that were presented  to me due to my academic performance were not quite feeling like the right fit. My inclination to science started in grade 10, when I realised my love for chemistry and geography. I just wanted to understand how nature operates; I was mesmerised by the history of mountain formations and how rivers flow from one side to the other, where they start  flowing  from, and who/what created  them.  I  was also deeply preoccupied with  questions about how it was possible that my village had a spring while other villages did not - that curiosity is what ultimately led me to pursuing a career  in earth science, which I considered also due to my passion for outdoor work.

What are  your fields of interest in water and what motivated your choices?

After falling in love with chemistry and geography in high school, I gravitated towards geology for my university studies. I then took up work in the water sector, focusing on groundwater, and that introduced me to another part of science that’s directly linked to geology that I had not paid attention to before - hydrogeology sparked my interest and I took on further studying on a part-time  basis,  which  exposed  me to the challenges  associated  with groundwater - one  of which  was the attention  this water resource  gets as an emergency solution during drought periods. My passion then developed towards the awareness- raising side of groundwater, particularly its importance, management  and how can we use science to influence policies to ensure that groundwater is developed, used and managed sustainably taking climate change into consideration.

Who are the monumental people that nurtured your  path to being a hydrogeologist?

My parents and my teachers  played a huge role in my career path. I had several teachers  from primary through to  high school (Ms  Tyaliti, Mr Tyumre, Mr Mazosiwe, Ms Mayekiso, to  name  a few)  who guided me because they  were  impressed  with  my  academic  performance.   My parents  did  not  know anything  about  science  so  they  entrusted  my teachers with any education-related decisions that I made and supported me throughout. My mentor, Fanus Fourie, and other hydrogeologists such as Nicolette Vermaak, Sakhile Mndaweni and Sivashni Naicker played a significant role and continue to mould me as a groundwater scientist. From what I have seen, earth science is a challenging, male-dominated field and it becomes  a challenge for women to carry out aspects like field work, especially in a country  with high gender-based violence statistics. An opportunity for women to take up space in the water sector has been provided and with more women in the sector, it is evident that women can contribute significantly to the field. Women are believed to be care givers and I am personally concerned with community work, so the water sector plays an important role for me because  the science space that I am involved in directly influences the social aspect that I’m also passionate about.

In terms of access, what do you imagine  needs  to be in place  to nurture and especially retain women  in earth science?

One of the challenges I have identified are in inequality of opportunities where women miss out on work with the assumption that women starting families will negatively impact company operations. I believe, that women should be granted equal opportunities as men based on their interests and abilities.

Oudi Kgomongwe is a sterling manifestation of visionary women with a heart for South Africa's people and its water. Nthabiseng Nooe interviews her about her work as a hydrogeologist and how she uses science as a public service. Think back to your earliest memories, what was your first inkling that you wanted to be a scientist?

I remember being a curious child that would ask questions about  why the sky is blue or why blood is red. I have also always cared deeply about my friends, their well-being and my community that I started taking part in addressing when I was introduced to the Southern African Red Cross along with my mother in Mokopane.

Being innovative, I would often create my own things that I couldn’t find in local shops – like putting together  a pair  of high  heels  from left  over  pieces  of roofing  wood to make the child  version  of adult heels, for example. I enjoyed solving problems and my small town upbringing provided plenty of opportunities for me to grow my problem-solving muscle.

In hindsight, I believe my earliest memories were marked by being of service to others and making a positive impact in my community.

What are your fields of interest in water and what motivated your choices?

I came across geology by chance in my second year at university after having started with biological sciences. I wanted to be of impact in a way that aligned with my personality, and I came to hydrogeology only after working as a geologist in mining. Now as a professional, science communication and water security are priorities.

With the global climate crisis, it is in our best interest to communicate the complex science of water in a clear relatable way.  I have witnessed my hometown transition from having water run through a tap with the same amount of certainty that the sun will rise tomorrow, to getting hard water and now dry taps. I hope that communicating scientific findings and solutions in a clear and relatable way to policy makers, decision makers and citizens alike will enable us to act with the urgency required.

Who are the monumental people that nurtured your path to being a hydrogeologist?

My parents were instrumental in nurturing my path to being an earth scientist: from entertaining my arts and crafts and the science  activity books I  went through; to paying  for any extramural class I identified to keep me at the top of my class.

I have also had several mentors who have introduced me to their professional circles and opened up world of possibilities I wouldn’t have discovered on my own.

Being a woman in the earth sciences is excites me because  the work I do speaks directly to the values  I  hold  as a woman and humanitarian.  It stimulates  my curiosity  because  science  is  not fixed, so it allows for me to dream and be creative.

"Science caters  for my innovative and problem solving energy and In terms of access, what do you imagine  needs  to be in place  to nurture and especially retain women  in earth science?

Women face a lot of bias in the earth sciences that men do not have to contend with - whether it is her ability to switch from heels to safety boots or work long weeks away from home. To retain women in the earth sciences women should be afforded the opportunity to thrive as is evidenced in the way women do work in other life area. Women need to be afforded the space to  being  fully  themselves.  The only  limitation  to  a  woman’s  professional  success  should  be  her  personal  ambition,  not somebody else’s bias.

Nthabiseng Nooe interviewed Annalisa Vicente about her specialisation and developing a career  as a hydrogeologist in South Africa. Think back to your earliest memories, what was your first inkling that you wanted to be a scientist?

Growing  up  as  an  only  child,  I  always  found myself  turning  to  nature  to  keep  me  busy. Spending quite a bit of time in the garden made me   question many things such as whether talking to my plants would help them grow faster and whether planting vegetables would bring more bird species into the garden. My untamed questionable mind led me to experiment.

In high school I had to make the big decision of what career  I wanted to pursue. This was a daunting decision that had me look to God for help and, after a week of prayer, something just'hit' me - I needed to pursue a career that was outdoors and in nature! Little to my knowledge did I know that "environmental and water science" degrees  existed and yet somehow ended up scouting  them.  This  was my  initial 'inkling' of wanting  to become  a scientist,  although  I would say it felt more like a 'calling'.

What are  your fields of interest in water and what motivated your choices?

Specialising in groundwater (hydrogeology) always intrigued me more than surface water (hydrology). I think there's something fun about 'playing detective with what is happening underground. My interest lies in numerical groundwater modelling, as I've found it  to  be  a powerful tool to  predict future flow  and contamination. Although, 'models' are  never 'correct'  per  se,  I thoroughly enjoy simulating a range of scenarios to better understand the hydrogeological response.

Who are the monumental people that nurtured your path to being a hydrogeologist?

I had the experience of support from many people: firstly, my aunt and uncle grew and sold organic vegetables when I stayed with them at a young age - spending  our sunsets gardening  instilled  my love  for the  environment.  Second,  was my best friend's  father - Uncle  Rodge - after dinners  we would  find  ourselves  in  deep conversations  about climate change and the effects  of overpopulation. Most times it  wasn't a  positive topic but always prompted  me  to  the  possibility of making a difference.  The third and greatest figures would be  my  mother  and grandmother  who have also always supported  my decision of studying something I was passionate about. They sacrificed a lot to get me educated and I am very grateful for that. Although there are certain difficulties in the workplace, such as safety in the field in comparison to the male colleagues,  Being a woman in the water industry feels liberating and purposeful. History has viewed women as 'water caretakers' due to their involvement in the community and reliance on the rivers and/or groundwater, being a woman in science feels like a tribute to that.

In terms of access, what do you imagine  needs to be in place  to nurture and especially retain women  in earth science?

In my experience, universities and funding institutions have done a great job in promoting women in science. I think that there are many powerful women in the industry to look up to and exposing students to them would be beneficial.

The women  I  had  looked  up while  in  university  were  Xanthea  Limlberg,  Candice  Lasher-Scheepers,   Nicollette  Vermaak, Marlese Nel and Helen Seyler. All of these woman were innovative, knowledgeable and passionate about what their work.

With the recognition of August being South Africa's Women's Month, Sarah Mahlangu was interviewed by Ikwekwezi FM and shared in IsiNdebele on how amazing the field of geohydrology is as a career choice for young woman.

Listen to the podcast